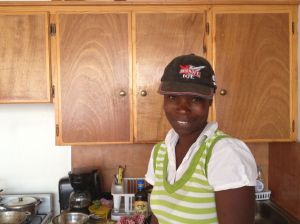 I start this by acknowledging that you, Dear Reader, might not like me much by the time you finish this.

I need to go ahead and tell you that I am not suffering for Jesus like you might have thought.

When I first imagined living in Port-au-Prince, like full-time, every single day, I envisioned a small cinderblock home with Spartan furnishings, little and unpredictable at that electricity and maybe a small cookstove. I would be hot, uncomfortable and likely lose weight.

One of three ain’t bad. I’m hot. But when I’m in my home on Delmas 75, I’m very comfortable. And the big secret I’m about to let you in on — her name is Paul Sinette — is one of many Haitians apparently determined that I not lose any weight.

My first inkling that I would have someone cooking my meals came back in March. I was visiting Haiti to attend a conference and look for a place to live. The first property owner I spoke with told me I needed someone to cook and clean for me.

I resisted this idea. I am coming her to serve, not to be served.

Oh, I had so much to learn. It took many conversations, a lot of healthy mental gymnastics and education, but I settled on the idea of at least considering hiring someone.

My first full month here was spent in the mountains with the Celestin family. That’s when I learned that if I was going to trim down, I’d have to start running every day. Three meals a day. Three full meals a day. And Papa Luc Celestin left orders with the family that my work there was to:

He quizzed me when he came home from work. He quizzed the people who were serving my meals. And when I didn’t put enough food on my plate when I was eating with him, he added more.

His son Herns helped explain the desire to feed people when it’s possible.

“Haitian people eat a lot when they can because they don’t always know if they’ll get to eat again soon,” he explained.

So I ate, or at least tried to convince Papa Luc I had “manje anpil.”

It became a running joke, but thankfully I was a bit glad to be in charge of my own meals. Which were starkly American. And not that good. The first few weeks I wouldn’t use my cookstove, so I depended on sandwiches and salads. My first Haitian guests got ham and cheese sandwiches. They were not impressed.

That’s when my landlady shared with me an idea about interviewing Paul Sinette. By this time, I knew the mutual benefits of hiring someone to help me. It provides an income for a family, it will help with my Creole (everyone tells me that if I eat Haitian food, I’ll speak more like a Haitian) and, the most startling reason of all — I can have all this for less than what I paid for my cable bill in the U.S.

She’s maybe 30 years old, has two children and goes to church at 6 a.m. on Sundays so she can spend the rest of the day helping me. She’s funny, loves to help me learn Creole and, oh yeah, she’s a fabulous cook.

While I’m writing this, I’m sipping on fresh squeezed orange juice. For lunch I had barbecued chicken, rice and beans with a tangy pepper and onion sauce, macaroni and cheese (yes, you read that correctly) and a huge fresh salad.

She buys most of the fresh fruits and vegetables, along with vinegar, oils, rice, pasta and sugar, at the street market. But she also goes through my pantry to find those old standards I’ve collected. Saturday’s lunch included a fresh salad with spaghetti served with a delicious tuna salad. I could tell she disapproved of the tuna fish, but I think she just wanted to use it up.

That was also the same day I reached for a Coke in the refrigerator and she calmly told me she was making fresh juice (that one was lemonade) and that I could have the Coke later ….

I’m still adjusting to the routine, but I can tell you that when I’m traveling one of the best parts about home that I miss is Paul Sinette. And not just for her cooking.

On Wednesday, she told me in Creole that she wouldn’t be here on Thursday because she needed to go the funeral for her mother’s brother. Without even realizing that I had seamlessly comprehended her Creole, I said, “Oh, I’m sorry your uncle died.”

Her reaction? She high-fived me and said, “Bravo!”

And she is grateful that I’m here, and, I believe, not just because she has a job.

I’m not sure how I feel about employing someone to work in my home. It still feels odd to me, off-kilter and strangely guilty. I, who came to serve am served, and I who eat so well, live very closely to people who might not eat much at all.

The dichotomy jostles me, and I hope it always does. Haiti is known as a place where hungry people live, yet the food here is some of the most delicious in the world. Strangely enough, the Creole word for hungry is grangou. And the word for delicious is gou.

But as recently as the 1970s, Haiti was able to feed itself, depending on the production of peasants in the countryside selling their goods. It was only after extended political corruption and greedy international trade agreements that the situation turned tragic.

My work is with agricultural organizations hoping to reverse that trend and provide more food for everyone here. It’s ambitious work, but I know that many good people are ready for this challenge.

This morning when Paul Sinette arrived with her trademark smile and “bonjou,” I asked if she’d already been to church.

Among the rest of her prayers, I’m pretty sure she asked God to make sure I chose juice over Coke and to help me with my Creole.

My prayer was simpler. I just thanked God for sending me her.